Last summer Top Chef Kevin Gillespie came to our co-op because he was hosting a video series sponsored by Stronger Together, being filmed for the International Year of Cooperatives.  Our co-op was chosen to take part in the series because of our involvement with our community.  He attended our summer party and visited Heritage Lane Farm, Misty Meadows Farm and Bellingham Urban Garden Syndicate (BUGS) to talk about their relationship with our co-op and our community.

Before he left town, I got to go out to dinner with him and the film crew and we talked a lot about food (of course!) as well as his upcoming (and now published) cookbook Fire in my Belly.  It’s a great read – lots of photos, a fun layout, and anecdotes from the author.  He told me I could demo any of his recipes any time and with the icy fog abounding in our region, I thought his Root Vegetable Soup recipe would be just about perfect for my recipe demo this week.

This is a recipe he created based on a dish his grandma used to make.  It is very simple to make, although it does require some knife skills as all the veggies need to be cut into the same size pieces to cook correctly.  I must admit that it was my first time preparing some of the root vegetables in this dish, and it was also a great excuse to use some of the delicious local produce we still have in stock (organic Jerusalem Artichokes, aka sunchokes, from Rabbit Fields Farm in Everson).  The recipe calls for turnip greens, which we do carry occasionally but are out of currently, so I substituted collard greens.  Other than that I was pretty true to the original recipe, except for cutting it down to 4 servings (you can find the original recipe for 8 servings in Kevin’s book).

One of my favorite cutting techniques is chiffonade – you roll your leafy greens into a roll and cut thin little ribbons.  They are so pretty and you can cut through a pile of greens in no time.  As for cutting the various root vegetables into a small dice, you will have to expect some waste as you first have to square off the edges of the veggies so you are left with flat edges to cut your dice from.  If you need a little guidance for safe and effective cutting techniques, you can check out the video and photos at Stella Culinary. 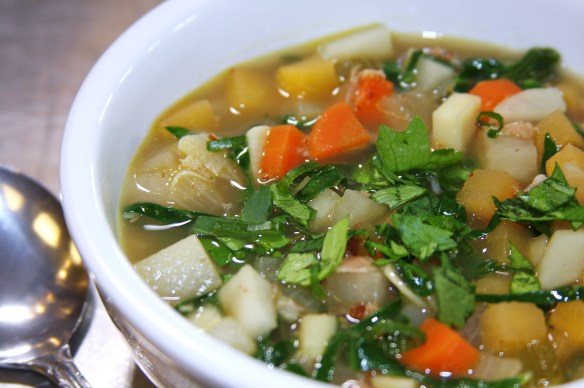 adapted from Fire in my Belly by Kevin Gillespie with David Joachim, used with permission

Tips from the Top Chef:

For a vegetarian version, use vegetable stock in place of chicken stock; sauté 4-5 shiitake mushrooms (cut into thin slices about a 1/4″ wide) over medium heat in 1-2 T butter or a fatty oil until they are soft, about 7 minutes, and proceed with the rest of the recipe.  Alternately you can use vegetarian bacon, prepared and cooked just like the pancetta in the recipe.  Neither will give you the same rich flavor of the pork, but either should add some umami to the dish.

In honor of Cinco de Mayo, this week I wanted to prepare a Mexican recipe. Even though you wouldn’t know it was May by looking outside in Whatcom County, everyone is craving a bit of freshness that this month usually brings – anything that might trick our brains into thinking that we might eventually see two full days of sunshine in a row! I know that I am already waiting eagerly for more local produce to start arriving, so I chose a recipe that is fresh and tastes like warm weather – Pico do Gallo.

Pico de Gallo is a common condiment in Mexico. It is commonly a tomato/onion base but can also be a fruit salad tossed with chili powder (in parts of Mexico where this is common, the tomato/onion version is referred to as salsa picada). It is a dry salsa, so it can be used in many different ways without creating sogginess. I’ll focus on the tomato version – where it gets its name from is slightly disputed according to Wikipedia, but translated it means “rooster’s beak”, and is thought to be called that because it was “originally eaten with the thumb and forefinger, and retrieving and eating the condiment resembled the actions of a pecking rooster”. While you can certainly eat it that way, you can also use it in tacos, as a chip dip, in fajitas, and even sandwiches.

Pico de Gallo is a really pretty condiment – the red from the tomatoes, white from the onion, and green from the jalapeño and cilantro conjure images of the Mexican flag.The lime gives it a sunny citrus-y aroma to complete the palette pleasantry. I used hot-house tomatoes grown in British Columbia and an organic red onion grown in Washington, but a couple of my ingredients fittingly came from Mexico – an organic jalapeño and an organic lime. Round that out with some organic California cilantro and you’ve got sunshine in a bowl!

To make this salsa “dry”, you have to seed the tomatoes. This is easily done by cutting the tomato in half and then using a spoon to scoop out the seeds into a bowl, letting the juice run out as well. After preparing my tomatoes, I dry roasted the jalapeño whole in a low-sided skillet over medium-high heat until the seeds started popping, to give it extra flavor. If you have never done this before, it can be a little startling when the seeds pop because the pepper will jump in the pan. Be sure you turn it often when you are cooking it so it doesn’t burn. This should only take a few minutes.  Once the skin starts to wrinkle and you don’t hear so many “pops” from the seeds, take it off the heat and tent some foil over it while you cut up the rest of your ingredients.

Once I had the lime juice squeezed and the onion and the cilantro diced, I added them to the bowl with my diced tomatoes and added a little salt. When the pepper was cooled, I cut it in half and seeded it, then chopped that up and into the bowl it went (don’t rinse the pepper to get the seeds out, otherwise it will lose some of the oils you released when it was cooked). It went into the fridge to chill for an hour or so and it was good to go (although this isn’t necessary). Pico de Gallo is best when consumed the day it is made, although you can eat it the next day – keep it in the fridge and drain out any liquid that has accumulated in the bottom of the bowl before serving for the best results.

adapted from www.mexicanfoodrecipes.org and Wikipedia

You can add other ingredients to traditional Pico de Gallo, like minced garlic, minced roasted peppers (either Bell or hot peppers), cucumber, hard fruit like mango, jicama, or radish for a slightly different flavor profile.